Alicia Richardson is an actor/writer and voice coach originally from Boynton Beach, Florida. She came to Canada for the affordable tuition, then she got health care and figured…why fight it? Now she’s a Permanent Resident livin’ that sweet (but sometimes sour) artist’s life in Toronto. Her body of work spans television, film, theatre, and voice-over. In 2019, she became a founding member of Counterbalance Collective: a female-led indie film collective. Selected acting credits include: Two for the Win (Hallmark), Private Eyes (Global), and American Woman (CBC Films / Telefilm Canada). Follow her tasty, multihyphenate adventures here: //IMDB.me/aliciarichardson or on social: @leesheelovesyou 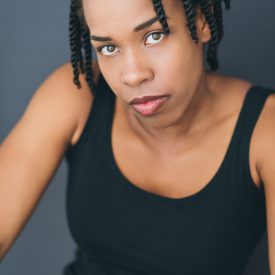 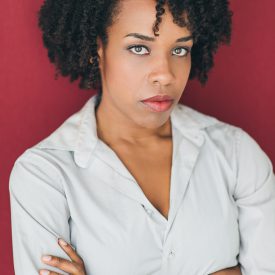 My first memory of inspiration has to be Whoopi Goldberg. Watching her in The Color Purple was a revelation; her whole being (mannerisms, physicality, voice) underwent this remarkable transformation. Her performance was utter alchemy, and I wanted to “make gold” too. Not to mention, the rest of the cast was straight FIRE! That movie electrified me on a cellular level.

Leticia F*&$in’ Lewis from Lovecraft Country. (I’m not cussin’ at cha, that’s a quote from the show!) Leti is an entire mood. She goes on epic, action-packed adventures. She’s defiant, outspoken, witty, protective, courageous, yet still gets to be vulnerable and sweet with her lover. Leti’s stylish, sexy, and just a lil’ dangerous–out here swingin’ a baseball bat and being underscored by Rhianna, I LIVE! Playing a leading lady with this level of complexity in a story of Black resistance? SIGN ME UP!!!