Vlad Alexis is an actor, writer and producer. Having studied at Dawson College in Cinema and Communication as well as the CBC Actor’s Conservatory at The Canadian Film Centre, Vlad has been making his mark in the Canadian Industry with his recurring role on Mary Kills People, Guest Star role on Nurses, Supporting lead roles in Roland Emmerich’s Stonewall and Code 8, starring Stephen and Robbie Amell which was the number 2 movie of April 2020 on Netflix US. The D Cut, co-produced by Shaftesbury and Dove, was released summer 2020 on Crave and KindaTV in which he was series regular. He will soon be seen as a lead in Lune directed by Avi- va Armour-Ostroﬀ and Arturo Perres as well as supporting lead in SuperDicks directed by Sammy Ray Welch.

Theatre is also a big part of his life, having done shows such Choir Boy (Centaur Theatre), Hang (Obsidian Theatre), Blind (Scapegoat Carnival), Hairspray (Just For Laughs). He is also a mentor of the Black Theatre Workshop’s Artist Mentorship Program As Chief Executive Producer and Artistic Director of Sixela Studio created by his brother Jimmy, his goals are to produce and write content that gives fair representation to marginalized com- munities and give opportunities to the underdogs while representing his hometown, Montreal. 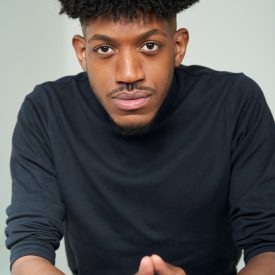 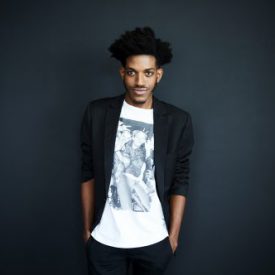 Cliché, but a Disney World trip when I was 4 did it for me. I was wandering around Micky Mouse’s house and saw him take off his “head” only to reveal a middle aged man in the suit which clearly I wasn’t supposed to see. Traumatized, I asked my mom what was going on and she told me that this man was an actor. From that moment on I decided that I wanted to become an actor. My goals evolved from playing Mickey but the magic still lived on with me through the discovery of endless stories that could be told.

The industry finally has the opportunity to really explore diversity without the tokenism and create characters, that might have been neglected in the past or serves as the expository BIPOC bestie to the lead. I want to play roles that are fleshed from extensive character development and their stories to be so well thought of, that their motives become justifiably valid whether they’re an antagonist or protagonist. That’s what I wanna play. But if I had to choose one dream role, it would be Sammy Davis Jr. He defied all odds and changed the status quo for black performers.